Whether discussing human rights, learning about Winnipeg’s gripping history and its colourful characters, or taking in a modern-day theatre production at one of Canada’s largest fringe festivals, the city is alive in summer with an intriguing story to tell at every corner.

Arrive in Winnipeg
Explore Winnipeg’s rich historic past on a guided city “Heart of the Nation” tour aboard a charming heritage trolley. From 1870 to 1920, Winnipeg was the driving force of Canada with a disproportionate amount of wealth. The Winnipeg Trolley takes your group back in time to learn why Winnipeg was once called the “wickedest city in Canada,” how an underdog local hockey team became the world’s first Olympic hockey champions, the city’s connection to the world’s most famous spy—James Bond, and more.

Exchange District Walking Tour: A National Historic Site, the Exchange District neighbourhood holds Winnipeg’s deepest and darkest secrets. Your group will spend the afternoon on a walking tour with enthusiastic guides examining legends of power, corruption and heroism while you admire the stunning collection of architecture. Specialty tours are available to include the theatre district, newspaper row, movie industry, Winnipeg Grain Exchange, death and debauchery, the Winnipeg General Strike and Banker’s Row.

Break for lunch in the historic Exchange District, home to the Winnipeg Fringe Theatre Festival and beautiful Chicago-style architecture, along with trendy galleries, boutiques and eateries.

Afternoon
After your group has fuelled up, spend the afternoon at Lower Fort Garry, North America’s only restored stone fort from the fur-trade era. Costumed guides tell the inspiring tales of innovation, discovery and struggle at the fort. Meet the Governor of the Hudson’s Bay Company as he strolls through his garden, barter with the company clerk, grind grains in a quer and listen to metal being hammered in the Blacksmith Shop. Your group can experience the fur trade by participating in a butter-making workshop or taking behind-the-scenes tour.

Spend the evening at Canada’s second-largest Fringe Festival offers your group the chance to experience cutting-edge theatre performed in various venues throughout the Exchange District. Sit back and take in plays that range from hilarious physical comedy and improv, to moving dramas and one-person shows. Check out Old Market Square, the main hub of the Winnipeg Fringe Theatre Festival, for some more thespian action. Join the crowd and watch free entertainment programmed throughout the day and night.

Morning
Spend the morning with Mother Nature at Winnipeg’s prime green space, Assiniboine Park. While on a guided tour, stroll through colourful, fragrant flowers in bloom at the English Garden. Then, marvel at fine art sculptures complemented by lily ponds, fountains and flower beds in the Leo Mol Sculpture Garden. Your adventure is complete with lunch in a restaurant overlooking the verdant lawns of the park.

Afternoon
Canadian Museum for Human Rights: The Canadian Museum for Human Rights is an “idea” museum designed by Antoine Predock.  This national treasure is redefining Winnipeg’s skyline. The museum will share stories of human rights issues from around the world; its goal is to bring people together to engage in discussion and commit to a world where everyone is respected.

After the tour, let your group enjoy free time exploring Manitoba’s No. 1 tourist attraction, The Forks. Take a self-guided heritage tour, learning about the area’s 6,000 years of history while strolling through lush, green parkland and stop at the Oodena Celebration Circle, an amphitheatre and meeting place that plays homage to the area’s rich aboriginal history. Browse stalls and quaint boutiques at the public market, dine at one of the many restaurants and kiosks representing cuisines from around the world and take in live entertainment from classical music concerts to street performers.

Evening
Offering the best in musical theatre, Rainbow Stage is a Winnipeg summer tradition must-see. Bring your group to watch a popular, full-scale theatre production performed in an open-air, dome theatre, which has been delighting audiences for more than 58 years.

Manitoba’s fascinating history and roots during the fur-trade era are showcased at Fort Gibraltar, offering your group the chance to experience a piece of the past. This reconstructed 19th-century fort features colourful costumed interpreters living to the “beat” of 1815. Once a North West Company fur trade post, Fort Gibraltar reflects the lifestyle of the settlement and the roles played by the Métis, settlers, explorers, aboriginal people and the adventuresome voyageurs. Tour the fort, participate in axe-throwing, eat bannock, play voyageur games and discover the diverse cast of characters that call it home.

Afternoon
Theatre in the Cemetery: Continue exploring the fascinating history of St. Boniface and Manitoba with “In Riel's Footsteps,” a guided tour with attitude. This theatrical experience offers a new twist on learning about French-Canadian and Métis heritage. Your guide is Angélique Nolin, Western Canada’s first lay school teacher, a dynamic character who knows a lot about Manitoba’s history. From the arrival of the first explorers to the birth of a province, St. Boniface cemetery tells the story of 150 years of courage and perseverance. 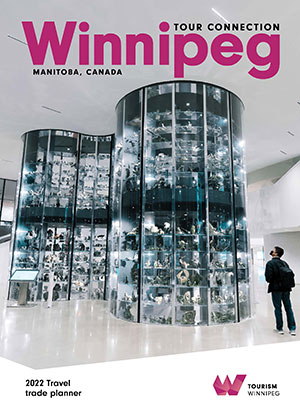